What is Tae Kwon Do?

Taekwondo is a modern art, characterized by its fast, high and spinning kicks.  Taekwondo is often translated as: “The way of hand and foot”.

Taekwondo literally means: “The art of kicking and punching” or “The art of unarmed combat”.  Although it is a system of self-defense, it is more than a physical fighting skill.  It represents a way of thinking and a pattern of life requiring strict discipline.  It is a system of training both the mind and the body in which great emphasis is placed on the moral development of its students.  Students receive instruction in principles such as courtesy, integrity, perseverance, and self-control.  Practitioners wear a white, loose-fitting uniform known as a dobok, tied at the waist with a colored belt that indicates rank.

Taekwondo is learning how to combine the spirit, mind and body to achieve spiritual, mental and physical balance.  Taekwondo is a way of life.  We learn that avoiding conflict is not a sign of a coward, it is a sign of wisdom.  It teaches us to commit ourselves to our goals and develop effective strategies to achieve them.  Through Taekwondo training, we treat our bodies with respect and improve our own strength and ability.   Our “spirit” can also be called our “heart”.  It is the heart or spirit that pushes us to do twenty more kicks, to run another mile or to practice our form one more time until we have it right.  It is the spirit that refuses to quit or allow us to give up.  It is the spirit that helps the mind overcome fear.  The final goal of Taekwondo is to achieve harmony with nature and oneself.  Balance is gained by controlling both positive and negative forces.  A true Taekwondo student knows how to behave in all situations.

Taekwondo has many benefits for all those who wish to train in this ancient martial art.  Although physical training and the development of the flexibility in the body are positive aspects of Taekwondo, it is the mental training that one receives that is the most important.  Students learn the difference between what is right and what is wrong.  They learn how to focus on the task at hand and concentrate on what is going on in the world around them.  We learn how to listen and how to react to any given situation.  Our training allows us to become more confident in ourselves and develop a strong sense of self-esteem.  Taekwondo is a “thinking-action” philosophy.  We must first use our brain to think about what we are going to do and then use our bodies to carry out the action.  Once we achieve balance between the mind and the body, we are able to be our best in all situations.  It is the combination of mental and physical training that makes up the art known as taekwondo.

1. To develop an appreciation for Taekwondo as a sport and as an art.
2. To achieve physical fitness through positive participation.
3. To improve mental discipline and emotional balance.
4. To learn self-defense skills.
5. To develop a sense of responsibility for one self and others.

Taekwondo has no age limits and is a very good sport for children.  They learn fast reactions through games, learn to respect others and learn to know their abilities and disabilities.  There is very little person-to-person contact while practicing Taekwondo.  Only those students who choose to go to competitions and compete in sparring (which requires full protective equipment) are allowed to make contact.  Taking part in a competition is not to hurt your opponent, but to test your strength, in both physical and mental ways. 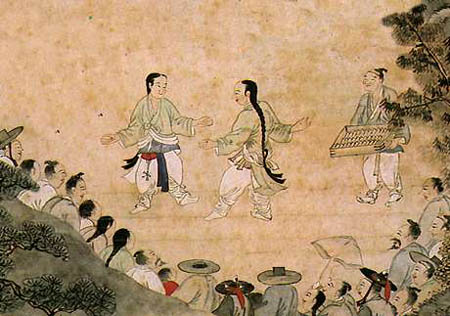 The earliest records of martial arts practice in Korea date back to about 50 B.C.  The have existed in Korea for about the last 2,000 years.

The very first Taekwondo students were an elite group of young noble men, devoted to developing their mind and body to serve their kingdom.  They had their own honor code and practiced various forms of martial arts.  The old honor code is the philosophical background of modern Taekwondo.

Modern-day Taekwondo is influenced by many other martial arts.  The most important of these arts is Japanese Karate.  This is because Japan dominated Korea from 1910 until the end of World War II.  During WWII, lots of Korean soldiers were trained in Japan.  During this occupation of Korea, the Japanese tried to erase all traces of the Korean culture, including the martial arts.  This ancient martial art was then passed secretly from masters to students at the risk of imprisonment.  After WWII, Taekwondo was practiced freely across the country and began to spread to other continents.  During the height of the Korean War, President Syngman 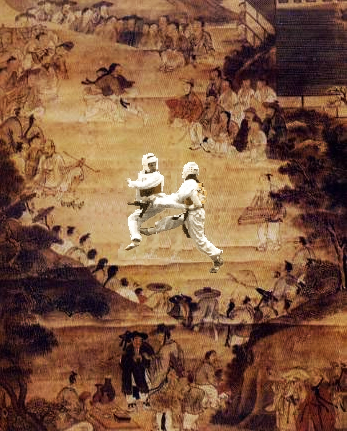 Rhee watched a 30-minute performance by Korean martial arts masters.  He was especially impressed when Tae Hi Nam broke 13 roof tiles with a single punch.  After the demonstration he ordered his military chiefs of staff to require all Korean soldiers to receive training in the martial arts.  The police and air force also had to learn Taekwondo as part of their military training.  The study of Taekwondo spread rapidly from the army into high schools, colleges and to the general public.

Today, Taekwondo is the most widely practiced and fastest growing form of martial art in the world.  popularity, Taekwondo was introduced as a demonstration sport in the 1988 Olympics in Seoul, Korea.  Twelve years later, it became an official competitive Olympic sport in the 2000 Olympic Games in Sydney, Australia.  Although there are many different forms of martial arts across the globe, Taekwondo was chosen for the Olympics because if combines all aspects of the various different forms of martial arts.  Over 30 million people practice Taekwondo in more than 156 countries, making it an ideal choice for this world-class event.